A key binding (also known as a keybind) is a method to manually bind keys to key or button-controlled actions in the game. Keybinds are very useful when it comes to switching between weapons since several of the default keys are uncomfortably far away from a player's keyboard hand.

How to Change your Keybinds[edit | edit source] 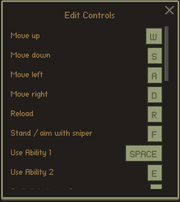 Go to the Slay.one main menu. Click on the Options gear at the top-left corner of the menu, then click the "CONTROLS" button. You should see a list of labels and buttons titled "Edit Controls". To change the key to shotgun, for example, find the "Switch to Shotgun" label and click the button next to it. The letter on the button should turn red. Then press the key you want to bind to shotgun.

Below are the default keys in Slay.one and their effects. Note that these keys will remain the same on an AZERTY keyboard, so you will have to manually bind them. To see these keys, press the Options gear in the top-left corner of your screen, then press the CONTROLS button.

Note: Energy Rifle does not have a default hotkey, but you can assign one.

R = Reload weapon (This manually reloads a weapon, even if it doesn't have an empty cartridge - for example if I had a Minigun with 30 ammunition, I could press R to reload it.)

Enter = Open chatbar. Type in your message, then press Enter again to send it.